Our team displays an unrivaled commitment to our clients through continuing education, technological advances in veterinary medicine and service, and most importantly, administering compassionate care to all pets entrusted to us.

The friendly, professional staff at Prairie Village Animal Hospital is made up of dedicated individuals who have made it their mission to help pets live long, healthy lives. 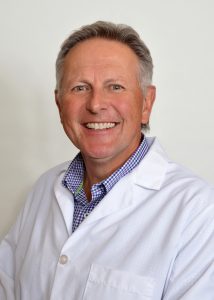 Dr Mark Daly
Dr. Mark G. Daly grew up in Garden City, Kansa, graduating from Garden City High School in 1971, and then attended Kanas State University, where he received his D.V.M. in 1977. His love for animals and interest in veterinary medicine began when he started working with large animals, alongside his father, who was a cattleman and the owner of feedlots in Western Kansas. Upon graduation, Dr. Daly joined Prairie Village Animal Hospital and later became a partner with the founder of the practice, Dr. George Gates. Dr. Daly is proud to continue the mission of PVAH along with his dedicated associates, Dr. Ripperger, Dr. Wilcox and Dr. Edmiston; to provide the Kansas City community with exceptional veterinary care and personal attention to pets and their owners.

When away from the animal hospital, Dr. Daly, along with his wife Patty, enjoys spending time with their three daughters, son-in-laws, and grandchildren. He is a devout sports fan, loyally following the Wildcats and Chiefs. He can be found relaxing by playing golf or traveling, often to warm, beach climates. 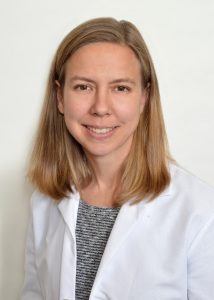 Dr. Krista Edmiston
Dr. Krista Edmiston attended the University of Kansas and Kansas State University, where she earned a D.V.M in 2004. Following several years of practice in Kansas City, Dr. Edmiston formed her own business, Relief Veterinary Services, to provide veterinary care at animal hospitals and clinics needing veterinarians short-term. This work provided her with an opportunity to work with dozens of other veterinarians in a variety of settings. She provided veterinary care through this business in Denver for over a year before returning to the Kansas City area, where she continued her relief practice before joining the staff of PVAH in 2016.

Dr. Edmiston currently lives in Overland Park with her husband and four small children. Her home also includes three furry kids, Sushi a small yet busy terrier and two cats, Smay and Tuxie. In her spare time, she enjoys spending time with her family and trying different restaurants around Kansas City.

Centrally located in Prairie Village, Kansas at Corinth Square Shopping Center right next to Land of Paws – our facility offers parking with easy access to the hospital.  Behind the scenes, our exam rooms and labs offer our clients the latest technologies with a focus on providing your pet with the quickest diagnosis.